What I Learned From This Year’s Masters It’s been a few days since the truly epic Masters week concluded. Typically it signals the greeting of spring time and the ceremonial beginning of the golf season. This year’s special event provided me more to ponder than usual.

First and obviously, we all learned that Tiger Woods is once again a force to be reckoned with. And based on social media, he still has his haters, but don’t most of us still love a comeback and redemption story, and how about an underdog?

Tiger Woods has matured into a much more patient man and competitor with improved values. It was refreshing not to witness the club slamming, cursing, or tantrums of the not too distant past. We know he cares. He tries and it was nice to see him as a human being and family man in victory.

With Tiger’s victory, television ratings should soar for the year’s remaining major championships and the industry gets a sorely needed boost.

Brooks Koepka is becoming a dominant force in the majors, and Dustin Johnson, Tony Finau, and Rickie Fowler are lurking while Rory McIlroy, Justin Thomas, Jason Day, Justin Rose, Paul Casey, and Jordan Spieth are on again, off again. Meanwhile Phil Mickelson continues to tease us with special play.

Francesco Molinari is gaining in world-wide recognition and respect. He also made many friends with his two final nine double-bogeys. And Xander Schauffele’s upbeat demeanor and smile were fun to watch.

Even with a very long, hilly course, with some hellacious putting surfaces, given no significant wind and softer conditions, these men still shoot incredibly good scores. Their short-games are unbelievable. Even two amateurs broke par. Wind and firm, fast conditions are the only things that deter them. And man, they are hitting the ball far!

It’s sad that Augusta National feels they must contemplate lengthening the layout to stay relevant.

There is nothing significant of Alistair Mackenzie’s design left in the course outside of the basic routing.

Slow Augusta National putting surfaces are still fast and hole locations determine birdies versus bogeys. The Green Coats do a great job with this.

The Par-3 Tournament is always a hoot.

Tiger Woods could not make a living playing the lengthened par-four 5th hole (four bogies). This is the one and perhaps only hole I might tie him, but it play like a par-five for me.

CBS never aired Molinari’s poor layup on the par-five 15th that caused his ill-fated approach shot. That said, they did air a total of 450 golf shots on Sunday or 1.38 shots per minute. Although that number was slightly lower than the previous two Masters (1.41 in 2017 and 1.38 in 2018) according ClassicTV Sports.com who has been tracking such at the four majors starting in 2014.

Jim Nantz is the consummate professional, but almost too over-exposed and syrupy for my tastes. Are you surprised that he called this year’s Masters “ “…the best event I’ve ever covered!” Kudos to Nance who also went a full two-and-a-half minutes without saying a thing following Woods’ winning tap-in. I would have loved to have seen a “Johnny Miller Edition” just once.

The four minutes or so of television commercials per hour certainly make for shorter bathroom or food breaks. This is in stark contrast to the PGA Championship that is unashamedly littered with constant commercial interruption.

I continue to never see a bird in flight around the course, but hear an almost constant cacophony of bird sounds. What’s up with that?

This is one golf tournament that I scan the galleries for people I know, and I’ve spotted a few.

It’s nice to see a good group of Tiger’s competitors wait to greet him before he entered the Clubhouse. That’s really classy and something the LPGA players have long done.

The new women’s amateur event and the annual Drive-Chip-Putt junior competition do provide nice added exposure, but I can’t imagine how many LPGA professionals are wondering why they couldn’t have had a piece of the pie?

It made sense for the Green Coats to move up the Sunday starting times and play in threesomes to lessen the weather-related chances of having to finish on a Monday. Thank you even if I had to get up early on the West Coast to watch.

Everyone is desperately hoping for a bump in golf participation thanks to Tiger’s resurgence. The big question may not be if, but how short-lived it will last? Slow play is killing the game and the tail is leading the dog with the professionals.

This Masters was epic and never to be forgotten.

And just imagine what God could do if she had Augusta National’s money? The course and Masters/Augusta National operations are the closest thing to “Fantasy Golf” for at least one week a year.

Say “Yes!” To Improving Your Game 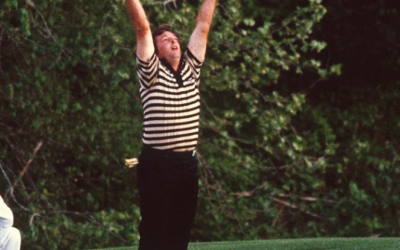