The Algarve — Some of Which Is Full of Eastern Promise You can split the Algarve more easily than a fairway; not along political lines between loyalists who wish it to remain part of Portugal and separatists who would prefer it to be an independent golfing state; nor culturally between golfers and non-golfers where the former want to treble the number of courses, dump the Euro in favour of the Titleist and ban T-shirts and jeans from all public places.

The truth is rather more prosaic. The divide in the Algarve is simply geographical between east and west. It’s easy — everything to the west of Faro is the Western Algarve and everything to the east is the Eastern Algarve. However, what we’re dealing with here is not simply nomenclature. East is east and west is west and although the twain may meet in Faro Airport’s duty free shopping area, there are significant differences between them.

The Western Algarve is stuffed with more famous courses than you can shake an olive branch at. They read like a golfing gourmet’s menu of irresistibly appealing dishes. “A plate of Penina to start, followed by a Vale do Lobo (medium/rare), a portion of Palmares and a baked Vilamoura for dessert, all washed down with a chilled bottle of San Lorenzo.” Delicious but wait until you get the bill. Ah, with all the force of a well-struck three iron we’ve hit upon one of the principal attractions of the Eastern Algarve – it’s cheaper. It’s also less developed, less crowded and consequently attracts an altogether more mature pioneer than the young men who heed the traditional advice to go west.

If the Eastern Algarve were to form a breakaway state then Tavira would be the capital. A pretty port with cobbled streets, a roman bridge and more than enough churches, it comes alive at night and the energetic could walk around it in the time it takes to play nine holes.

But we’re not interested in nine holes as from Tavira to the Spanish border – a distance of about 25 kms – there are enough full-size, quality courses to keep everyone happy. Two of the best are tucked into the coastline about halfway between Tavira and the border. They are the two sisters, Quinta da Ria and Quinta da Cima. Okay, strictly speaking sisters would share a surname not a Christian name, but there is no doubting that these two are very closely related and live happily together. Although undoubtedly alike, each has her own distinctive personality and so there’s no problem telling them apart. Both were designed by William ‘Rocky’ Roquemore, who has shown considerable flair in creating such an appealing pair of coastal crackers.

Opened in July 2002, Quinta da Cima is the slightly younger and, at nearly 7000 yards, the significantly longer of the two. The terrain is gentle enough to make walking a pleasure and, despite the fact that solar-powered buggies can be hired, you can easily manage without one. However, it’s not all plain strolling as there are hazards to avoid.

With so much sand available on this delightful stretch of coastline, it’s hardly surprising that there are clusters of bunkers. And for those with an appetite for trouble, there are streams, waterfalls, fountains and lakes as well.

Some of the olive trees comfortably qualify as super seniors, the oldest is reckoned to be about 850 years old and will have witnessed many historic moments, although nothing more strange, surely, than the sight of sunburned Englishmen in shorts struggling to hit long irons out of the rough.

Presented in superb condition, Quinta da Cima is a genuine championship challenge that has hosted the Europro Tour, the Ladies European Tour and several European Seniors Tour qualifying schools. Used for club competitions, one suspects that the lake on the 18th is only as full as it is because of the tears shed by heartbroken competitors who have screwed up at the death. Quinta da Ria is right alongside, every bit as beautiful and rather more popular among the members principally because it enjoys better sea views. Environmental considerations have prevented the course from encroaching closer to the Atlantic than 50 metres from the bluff above, which is plenty close enough. And the sea is not the only water to watch out for as a number of ponds and lakes come into play on half a dozen holes. These are home to a wide variety of waterfowl which, even though their unwelcome excrement renders cleaning the ball as imperative on a couple of the greens as it is unpleasant, they unquestionably add to the course’s considerable appeal.

At just over 6600 yards off the back tees, it’s comfortably long enough. Although the greens are a tad smaller than its neighbour’s, the fairways appear wider and the tee shots are not quite as tight. Both courses, however, are extremely well maintained and a real treat. And there’s an impressive new Robinson hotel on site that offers a whole range of activities for those strange individuals for whom golf is not enough.

Golf next to the sea is always something special and these two courses provide precisely the right blend of great views and challenging golf to satisfy the most demanding customers. And although the western Algarve has a great deal to offer, the less developed east is a lot less expensive and appeals to those seeking a quieter life.

Tavira is a lovely seaside town to wander around the cobbled streets and watch the river flow by. And if you fancy popping over to Spain, visit Vila Real de Santo Antonio and take the ferry. It’s a 15 minute journey and you can even take the car. A couple of great Irish gems and a 125 years old….

Get Up and Go to Abaco, Then Lie Back and Enjoy It 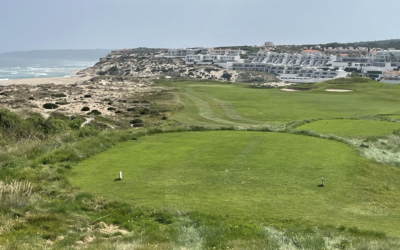