Branson was a tourist attraction long before the Osmonds, roller coasters and golf courses came to town. The natural beauty of the hills, streams and lakes throughout the southern part of Missouri were showstoppers ahead of Dolly Parton’s arrival. Still today, it’s Lake Taneycomo and Table Rock Lake that highlight the region. The lakes never freeze, and anglers regularly haul in some of Missouri’s largest bass, trout, catfish and walleye. And every November amateur fisherman come from all over the country to fish for a $1 million in the Bass Pro Shops U.S. Open Fishing Amateur Team Championships on Table Rock Lake. The lakes, streams and hills are the real heroes — everything else is ice cream on the pie

This ain’t your grandma’s Branson—Taney County’s been seasoned with a bit of sophistication and curry. There are two Thai restaurants, an Indian spot and white linen dining at Level 2 Steakhouse offers 28-day aged cornfed beef tender enough to cut with a butter knife. Their wine list is the work of a master sommelier—a departure from the region’s moonshine roots. There are popular chain restaurants and a Guy Fieri eatery along Branson Landing’s outdoor shopping, zipline, bowling and escape room party boulevard. And like the Fountains of Bellagio in Las Vegas, the Landing’s water and fire show serenades gawking tourists every hour on the hour. Silky smooth fruit-forward Paso Robles cabernets and prime steaks at Level 2 are lovely, but are they better than the biscuits and gravy at Clockers Cafe? This riddle would befuddle the most brilliant five-star Michelin chefs. Aligned with Anthony Bourdain’s indigenous approach to cuisine—Branson’s best is likely its country cooking. Clockers is a few blocks from the downtown Hilton, and love songs will be written about their $10 Country Fried Platter. It’s a sirloin steak or pork tenderloin fried happy like a diner waitress smile served with eggs, hashbrowns, scratch biscuit and a dump truck of gravy. It’s common for Ozarkers to have pie after breakfast and the strawberry, blueberry, blackberry and raspberry Traffic Jam Pie at McFarlain’s Family Restaurant is the people’s choice. There are good steakhouses in most big cities in America, but 5-star diners like Clockers are a rare slice of Americana. Most legendary golf courses in the world were desirable destinations before they cut tees and greens. The Monterey Peninsula doesn’t need the Pebble Beach Golf Links and the Ozarks don’t need Payne’s Valley either, but it’s nice to have them. And like how Wynonna Judd and the Oak Ridge Boys made Branson famous in the 80’s—it’s a-list golf course architects such as Bill Coore and Tom Fazio that pack the house these days.

A local boy done good, Bass Pro Shops Founder billionaire Johnny Morris built Big Cedar Lodge and its five golf courses in the name of conservation and to keep Ozarkers from moving off to Kansas City, St. Louis and the like. His successful vision spans almost 5,000 acres overlooking Table Rock Lake and the family resort has more activities than a Bass Pro has fishing lures. Branson is now a certified international golf destination. Big Cedar has three championship tracks by Coore and Crenshaw, Fazio and Tiger Woods and two short courses by Gary Player and Jack Nicklaus. Each layout is unique, but all share 10 out of 10 conditioning with true putting surfaces and Augusta-like fairways. In addition to this work of art, there are living-breathing buffaloes left of the first tee on Tom Fazio’s beauty Buffalo Ridge

Fazio’s Buffalo Ridge is a parkland-style beauty dotted with brilliantly shaped bunkers, adorable little streams with waterfalls, exposed limestone cliffs and hardwood truss bridges. Ozarks National by Coore and Crenshaw is a links style layout with tall native grasses, natural timber fences and the fairways are beautifully sculpted with plenty of bumps and bends. This track is a shaper’s dream and easy on the eyes from the tees with several elevated views of nicely shaped doglegs. While Ozarks National plays atop the hills—Payne’s Valley by Woods meanders through the basins. Named in honor of Payne Stewart who’s from nearby Springfield, this is Woods’ first golf course in America that anyone can play, and the “TW” branded tee markers will thrill Tiger admirers. The par five 18th and 90-yard par three bonus 19th with island green play up against a 300-foot rock cove for one of the most unique finishes in golf. Branson Hills Golf Club, a beautiful Chuck Smith and Bobby Clampett design with a quality 19th hole pub for a few cold ones after the round

Mr. Morris’ investment in the Ozarks is a Rockefeller humanitarian effort and worthy of the ongoing press it receives, but there are other reasons to celebrate this destination. Pilot, winemaker and longtime Masters voice Bobby Clampett helped shape the must-play Branson Hills Golf Club on the north side of town. This golf course complements an Ozarks golf itinerary like sausage gravy on a hot biscuit. The spaces are open, and views are long-range at the Big Cedar Lodge courses—not at Branson Hills. The woods are thicker, the trees are taller and the fairways are tighter on the Chuck Smith and Clampett layout. The great Ian “Woosie” Woosnam included, several Tour players have braved this challenging track and had a craic afterwards in the cozy gastropub. The bent grass greens roll pure like a marble on a quartz countertop and the fairways are fluffy. The green fees however are less than any of the Big Cedar offerings which puts Branson Hills in the running for best golf value in town. 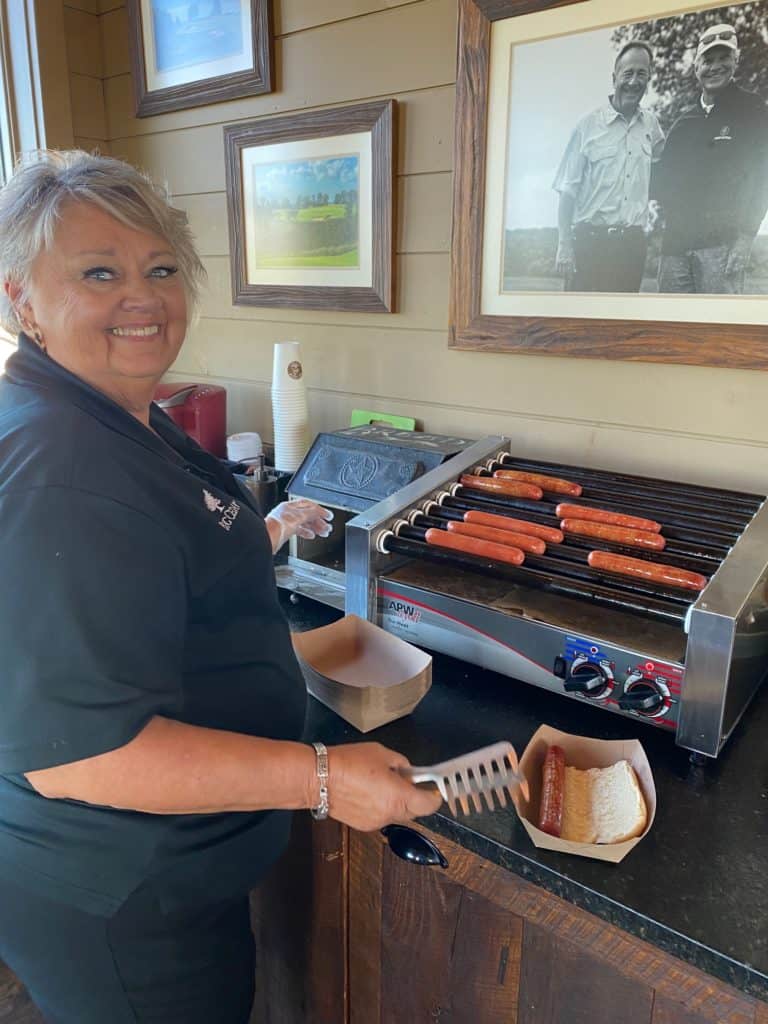 The golf trip memories that live with us forever are typically unexpected. Branson excels at intricate special moments—Ozarks National is a phenomenal golf course, but it’s Kathy, the Paula Deen doppelganger in the comfort station at the turn that people will remember. She serves jumbo dogs on steamed buns with a sincere smile and warmth that can’t be trained or faked. It’s an audacious scenario to consider, but the spirit of the Ozarks is found in the hot dog shack behind the ninth green. And the essence of the Ozarks is in the kind waitresses at diners topping off coffee with a smile. The selfless compassion of Ozarkers is a rare form of hospitality found all around town and likely the main reason people keep coming back. The Osage Tribe lived in the Ozarks throughout the 19th century. They followed buffalo and hunted the now extinct eastern elk. The fishing is good in the lakes these days but imagine what it was like before Bass Pro Shops was invented. The Osage are remembered in the Ancient Ozarks Natural History Museum which sits near the first tee of the Top of the Rock short course. The 35,000 square foot museum is Mr. Morris’ personal collection displaying approximately 40,000 artifacts—it’s like a mini-Smithsonian and one of the finest collections in the world. Mr. Morris built this museum out of respect to those that came before him. And while he’s certainly proud of what Branson is today—part of Mr. Morris probably wishes he could sit on a hilltop with the Osage in the early 1800’s when there wasn’t hardly anything in the Ozarks at all.

This article would not be possible without the help of Kelly Smith from the No. 1 morning television show in the Ozarks, “Ozarks Fox AM” hosted by Kelly Smith and Jeremy Rabe. It’s Southwest Missouri’s version of the “Today Show” with Hoda and Jenna—a loosie-goosy vibe with lots of laughing and unconfirmed, but possible pinot noir. Also, Lynn Berry from the Branson tourism office, big up to Matt McQueary at Big Cedar Lodge and shoutout to Dan Davis at Branson Hills Golf Club. Thank you!