Trending
You are at:Home»Destinations»Europe»The Black Knight Delivers on The Black Sea
By Clive Agran on March 31, 2016 Europe

Even those with ‘A’ level geography might not know the precise location of Bulgaria. Well, it’s just to the south of Romania, to the north of Greece and Turkey, to the east of Serbia and Macedonia and to the west of the Black Sea. Okay?

Over five million tourists managed to find it last year making it the 39th most popular destination in the world. The excellent climate, stunning scenery and relative inexpensiveness made it an attractive proposition for those seeking a second home in the sun and so Bulgaria emerged from comparative obscurity to briefly become the place to buy overseas’ property.

Holiday home developments sprang up before the recession brought the building boom to a grinding halt. Apparently the market is stirring again and golf is involved because developers appreciate the appeal of property adjoining a course.

Although not traditionally part of the Bulgarian sporting tradition, golf is growing in popularity and the number of courses emerging along the Black Sea coast in the unspoiled north-east of the country is significant and the area looks destined to become a genuine golf destination.

Three courses have emerged in remarkably close proximity along the rugged seaside cliffs just an hour’s drive from Varna airport. Collectively they comprise a significant cluster.

All have been conceived along broadly similar lines with property for those seeking a holiday home and quality hotels to appeal to tourists. And the trio are co-operating to woo well-heeled foreign golfers.

Ian Woosnam designed the course at the Lighthouse Golf Resort. Although work began in March 2006 and the course only opened in September 2008, it is well-established and an impressive on-site hotel certainly enhances its appeal. Sitting comfortably on top of towering cliffs, the course enjoys panoramic sea views and has been created to broadly resemble a links. It’s an appropriate style that works well with the adjacent Black Sea and the inevitable breezes. With innumerable bumps and hollows, inviting fairways and striking white bunkers, the eminently walkable course benefits from clear definition and provides an exceptional challenge. Although the rough is not too punishing, the top quality greens are decidedly tricky with subtle slopes and bewildering borrows.

Water occasionally comes into play and at least one of the five lakes poses a threat on the fourth, tenth and the closing stretch. The opening half-dozen holes spin you around before the seventh takes you to the precipitous cliff top for a wonderfully elevated sea view. The next runs along the edge and an unwelcome slice here will consign your ball to oblivion.

Off the championship tees, the course measures 6747 uncompromising yards. The medal tees trims 700 off that while the regular tees save you just under 1000 yards altogether. In theory, you can shave off another 500 by wimping your way to the forward tees but, having come so far, do you really want to chop off so much of a quality course?

With a chipping area, putting green and 300 metre driving range, it has all the practice facilities, ingredients and undoubted potential to be a truly outstanding destination.

Right next door, BlackSeaRama also has properties for rent or sale. They don’t intrude onto the course and the proposed boutique hotel has yet to be built. What is finished, however, is a truly gorgeous clubhouse. Stunning both inside and out, it enjoys breathtaking views of Varna Bay and Kaliakra Cape. 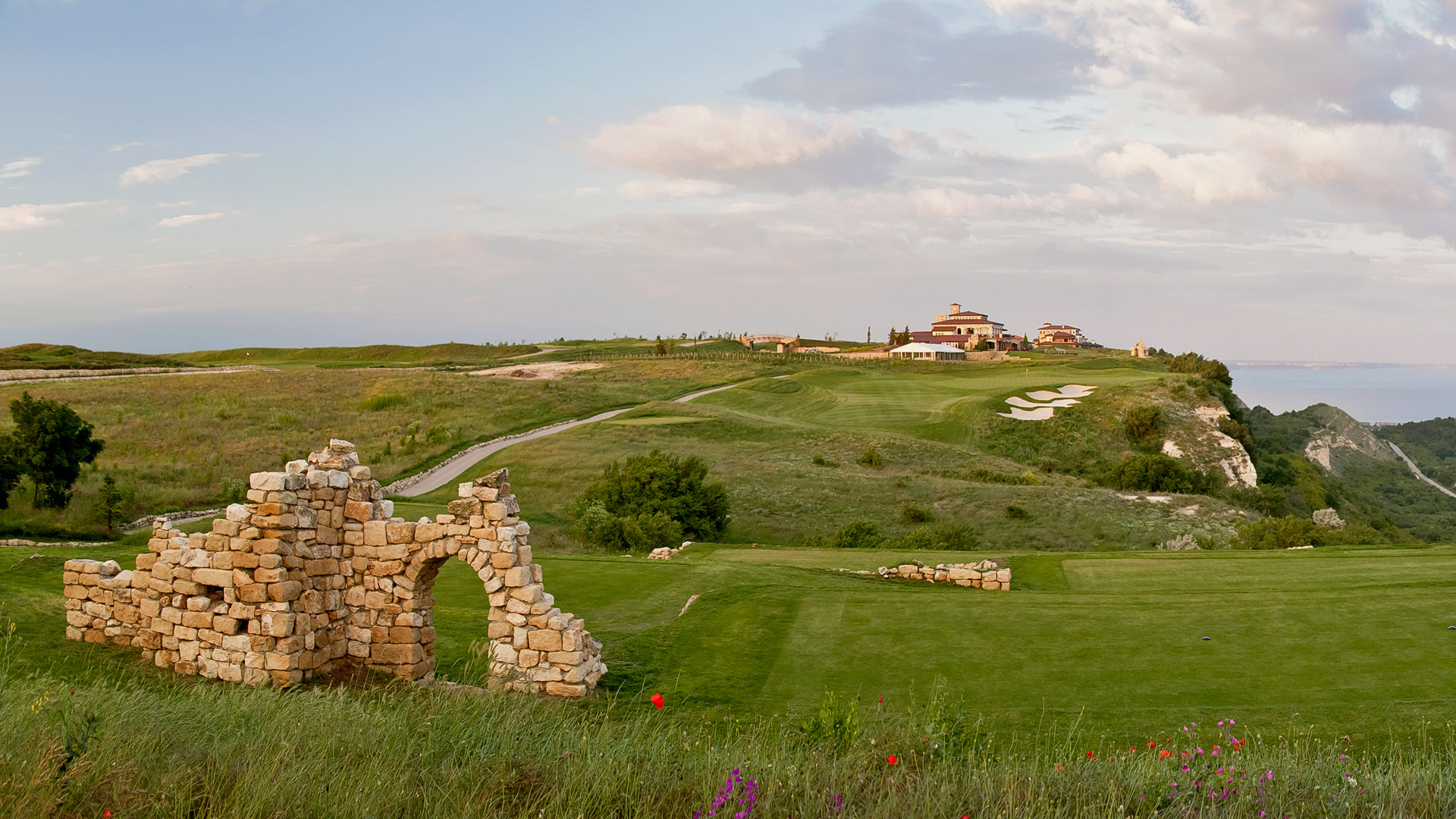 Gary Player has produced a masterpiece where each hole is delightfully self-contained between towering hillocks that re-create an authentic looking links. Although manufactured, the elevation on each tee is significant and adds considerably to the enjoyment of what is a superb layout. The several lakes, imposing bunkers and spectacular views all add to the considerable enjoyment.

It could well be that the developers who created Thracian Cliffs, just a short drive along the coast, were so impressed with BlackSeaRama that they, too, entrusted the layout of their course to Gary Player. Venue for the 2014 Volvo Matchplay Championship, it is a truly spectacular course that hugs a cliff and provides wonderful views of the Black Sea beneath. It’s tough, possibly too tough for some, but it would be churlish to condemn such a truly stunning piece of work simply because it was rather more difficult than it might have been.

Squeezed between the rocks and the beach, the course is virtually an old-fashioned nine-out, nine-back configuration that is trulybreathtaking with several greens and tees teetering on the water’s edge. With echoes of Pebble Beach, Kingsbarns and other coastal classics, Thracian Cliffs is truly spectacular.

Buying a home overseas can be rather risky and more than a few burnt their fingers in Bulgaria when the market turned south towards the end of the last decade. Leaving to one side the questionable wisdom of such investments, one can understand the appeal of holidaying in such a delightful part of the world. Throw in three quality courses and you can understand why this bit of Bulgaria is proving so popular with golfers.