Trending
You are at:Home»Destinations»Europe»Cyprus, an Island for all Seasons
By Clive Agran on March 4, 2016 Europe

Although it was never planned this way, Cyprus is fortunate in that the four principal courses – Secret Valley, Minthis Hill, Aphrodite Hills and Elea – are all clustered around the popular seaside town of Paphos. On top of all that, Paphos also has a brand new airport with connections all over Europe.

Aphrodite Hills is just 10 miles east of Paphos and overlooks the site where Aphrodite is said to have emerged from the sea. Part of an impressive resort with a five-star hotel, luxury villas, spa, tennis courts and numerous other sports’ facilities, it first opened its fairways back in 2002. Although the course hasn’t changed since then, the resort has flourished and expanded and is now rightly regarded as one of the best vacation destinations on the island.

Designer Cabell Robinson must have wrestled with a few problems when trying to decide on his layout. Although he doubtless relished the elevation, of which there is plenty, the site rather awkwardly bestrides two plateaux. A deep gorge lies between them and Mr Robinson must have confronted a challenging mix of problems and opportunities.

The lush Bermuda fairways look and play a treat. The greens, which are much bigger than average, are true and quick and the general appearance of everything from the flowerbeds upwards was first-class. My only serious criticism is that you have to take a buggy which, for those of us who like to walk, is a pain. However, with several long drives to the next tee and some perilous descents and steep climbs, there really is no alternative.

Secret Valley was the second golf course to be opened in Cyprus. Designed by local man Iacovos Iacovou, the first tee shot was struck back in September 1996. Created largely in response to demand from the considerable expatriate British community, for whom one club evidently was not enough, it flourished and rapidly grew in popularity.

No one knows for certain where the name ‘Secret Valley’ came from but, with its tall craggy sides that rise almost vertically on both sides, it’s difficult to access from anywhere other than the nearby coast, is easily missed and therefore, perhaps, something of a secret. It has recently benefited from a major overhaul and is now in first-class condition.

Ownership of the club is in the hands of Cyprus Golf Resorts, who also own Minthis Hills Golf Club. Members, of whom there are approximately 300, are able to play both. Which do they prefer? Almost inevitably, opinion is pretty evenly divided as to which is the better. Secret Valley is only a little above sea level and is therefore noticeably warmer in the winter months when the temperature drops into the 50s and 60s. This advantage, however, becomes a handicap in the summer months when the temperature soars and Secret Valley can become decidedly sticky. Thankfully, a cooling breeze almost invariably blows in from the Mediterranean to make things a little more comfortable.

A major plus for Secret Valley is that it is eminently walkable. The valley slopes gently towards the sea and there are consequently know steep inclines to be negotiated. However, as a consequence, there are no especially dramatic drops from elevated tees either. But the course is certainly not flat and what opportunities existed for creating interest have certainly been seized.

There is a significant stream that weaves throughout the entire length of the course. After winter rain it swells to a more impressive feature but even in the summer months, when the water largely disappears, its rocky bed creates a serious hazard that puts a premium on precision off the tee. The numerous pretty wooden bridges that cross it are attractive features that add considerably to the overall appeal. There are also a few ponds by the clubhouse but these are principally ornamental and should not be a serious factor unless you over club your approach to either the ninth or final hole.

There are quite a few bunkers but not so many that they pose anything other than the occasional problem. Rather unfairly, in my opinion, a couple are hidden. For example, there is one on the first about 180 yards from the yellow tee that can’t be seen when driving off. The suggestion is that you should either hit a really good drive or a pretty dreadful one and you’ll be all right; something straight and in between will quite likely end in the sand. Did Mr Iacovos Iacovou deliberately design secret bunkers to reinforce the secretive theme?

Minthis Hills is another course to have recently undergone a major overhaul. More dramatic than that, it had its name changed. In my experience, a change of name is rarely a good sign. It suggests an unhappy past and a desperate attempt to establish a new beginning. However, the changes that were made to what was formerly Tsada Golf Club, now Minthis Hills, were so radical and profound that what finally emerged is so dramatically different that a new name is perfectly understandable. Incidentally, Minthis comes from Stavros tis Minthis, the name of the 12th century monastery that stood near the site. Curiously, the Church still owns the land upon which the course has been built.

Occupying a wonderfully elevated position not far short of 2000 feet above sea level, the enormous clubhouse offers fabulous views across the surrounding hills, down to the distant bright blue water of the Mediterranean and over the town of Paphos, which is roughly 20 minutes away. And it’s not just the clubhouse that enjoys an elevated spot as the new driving range is similarly perched on the brow of a hill. Even a topped shot will travel a fair distance and the ‘hang-time’ on a well struck ball will seem like an age.

Major renovation work began on the course itself in 2006. Tom Mackenzie improved the layout and he explained to me that the course – originally built in 1994 and the oldest on the island – required nothing short of wholesale refurbishment. “Everything needed a great deal of work. The greens, tees and fairways were in serious trouble.” 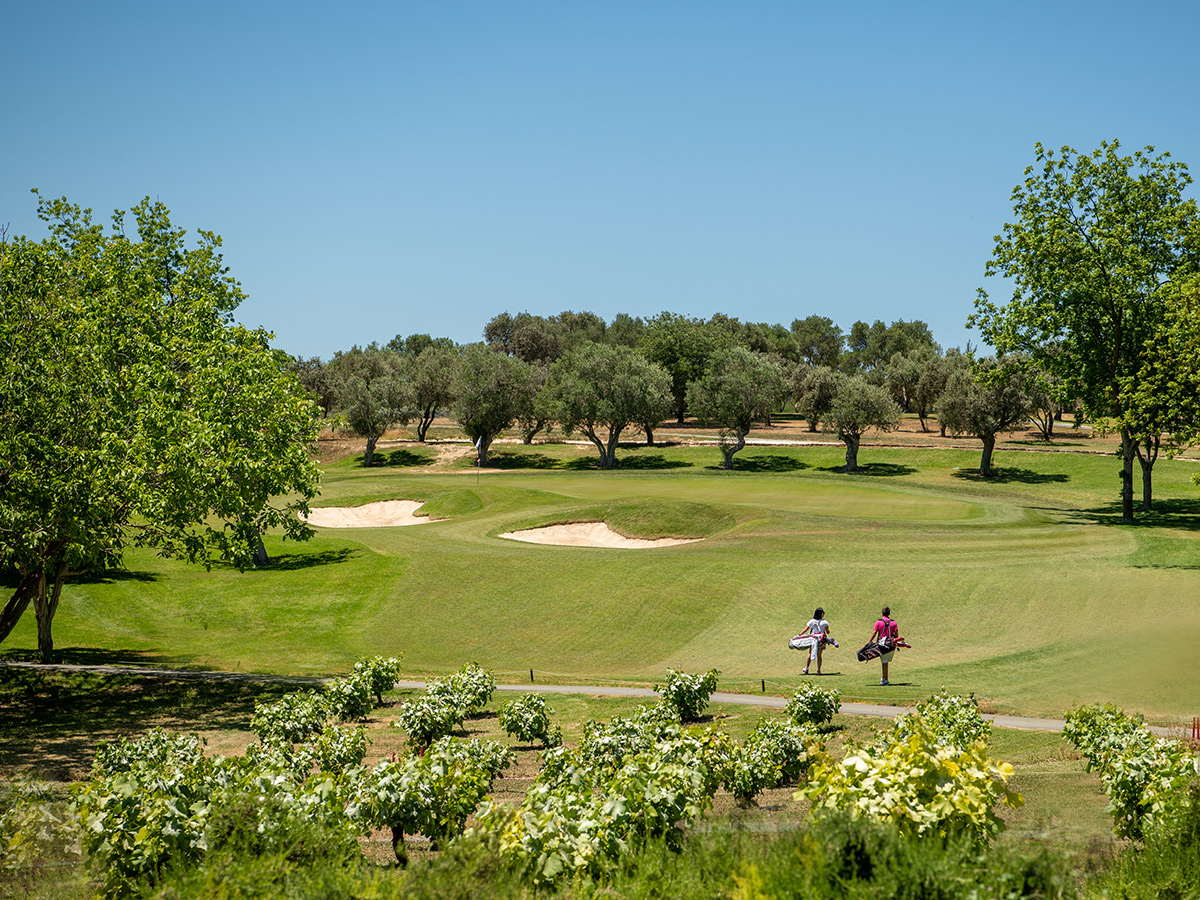 The area around all the greens was reshaped and re-grassed. Two new greens and two new practice greens were rebuilt. Significant work was carried out on a third of the fairways. Perhaps the most dramatic change was the extension of the 14th into a truly thrilling par four. Every tee and bunker was rebuilt. The irrigation system was completely renewed and drainage and water harvesting improved so that more water can now be safely collected and drained to the reservoir without being wasted or damaging the course.

Water run-off was evidently a major problem and was fast eroding areas on the course. Part of the solution has been the creation of a network of concrete drains that channel the water away. Because they are effective and save precious water, they can be forgiven for being both unattractive and a nuisance. Apart from extraordinary bounces and ricochets, they can collect a ball and roll it a considerable distance downhill.

Unsightly drains apart, the course is terrific with a great variety of holes, superb views and enough problems to challenge even the most accomplished of players. A little under 6500 yards, it’s also about the right length. Buggies are popular but certainly not essential. There are a couple of quite lengthy strolls to the next tee, but the overall layout makes walking a distinctly viable option.

Because of its height above sea level, Minthis Hills is particularly popular during the warm and very warm months when it’s noticeably cooler and often breezier than it is lower down.

Designed by Sir Nick Faldo and opened just a few years ago, Elea has rapidly established itself as possibly the most popular course on the island. It has a wonderfully natural feel and sweeps around a hillside not far from Paphos with grace and charm.

It presents a rich variety of problems and hazards and retains your interest throughout the round. Tough but fair, it also enjoys the considerable merit of being perfectly walkable even on the warmest of days. Although the green fee is steeper than the slope on which it has been built, it nevertheless is well worth the money and could legitimately claim to be the best course on the island.

Two more courses, both quite close to Larnaca, are in the pipeline and they should certainly enhance the attraction Cyprus has for golfers. But what the island presently lacks in number of courses it comfortably makes up in many other ways. Tagged ‘The Island for All Seasons’ it’s famous for the warmth of the Mediterranean sun that shines year-round; the breath-taking coastline, craggy mountain scenery and extraordinary natural beauty; legend, history and culture that stretches back over 10,000 years; a whole range of recreational activities from water-sports to hiking and biking; wonderful cuisine and wine; and, finally, the exuberant friendliness of its people.