Bilbao is the largest city in Northern Spain with a population of around one million. You can fly into Bilbao from most major airports and it’s less than a 20-minute cab ride to the city centre.

It’s a city waiting to be discovered and there is no better way to do that than to walk. By walking, you can either channel your inner explorer and see what you find, or use Google or a good old-fashioned map. Whatever way you choose to explore, you will find Bilbao has plenty to keep you occupied. The Guggenheim is a visually stunning museum of modern and contemporary art designed by Frank Gehry. The museum opened in October 1997 with an exhibition of contemporary works of art. Built next to the Nervion River, which runs through the city of Bilbao to the Cantabrian Sea, it features works by Spanish and international artists.

If contemporary art is not your thing, there is also the Bilbao Fine Arts Museum which has paintings from the middle ages to the present day. There are many historical buildings, squares and parks around the city, so plenty of non-golf activities for all the family.

The Land of Legends

Bilbao is one of the two of Costa Verde Golf’s  “Land of Legends” hubs. So-called, because the courses are designed by Jose Maria Olazabal and Seve Ballesteros. Jon Rahm, the third legend, learned to play golf and is a member of clubs in the area. All are from the Basque country. The other “land of Legends” hub is Vitoria-Gasteiz, which will feature in the next article. The course has a total length of 6,900 yards, with a par 72. It is located 60 meters above sea level and was designed by legendary Spanish course architect, D. Javier Arana.

Holes 2 thru 7 are open and located on the cliff, with views of the Cantabrian Sea. The rest of the course is very different as it winds its way through a pine forest.

The 3rd is as close as you get to the top of the cliff. It’s a strong par 4 of 440 yards. You need to find the fairway as the 2nd shot is uphill and is at least one club more than the distance to a green that you can’t see much of. The 6th is a lovely par 3 of 210 yards. It plays uphill and the bunker in front is deceptive as there’s another 20 yards to reach the green once you carry it. 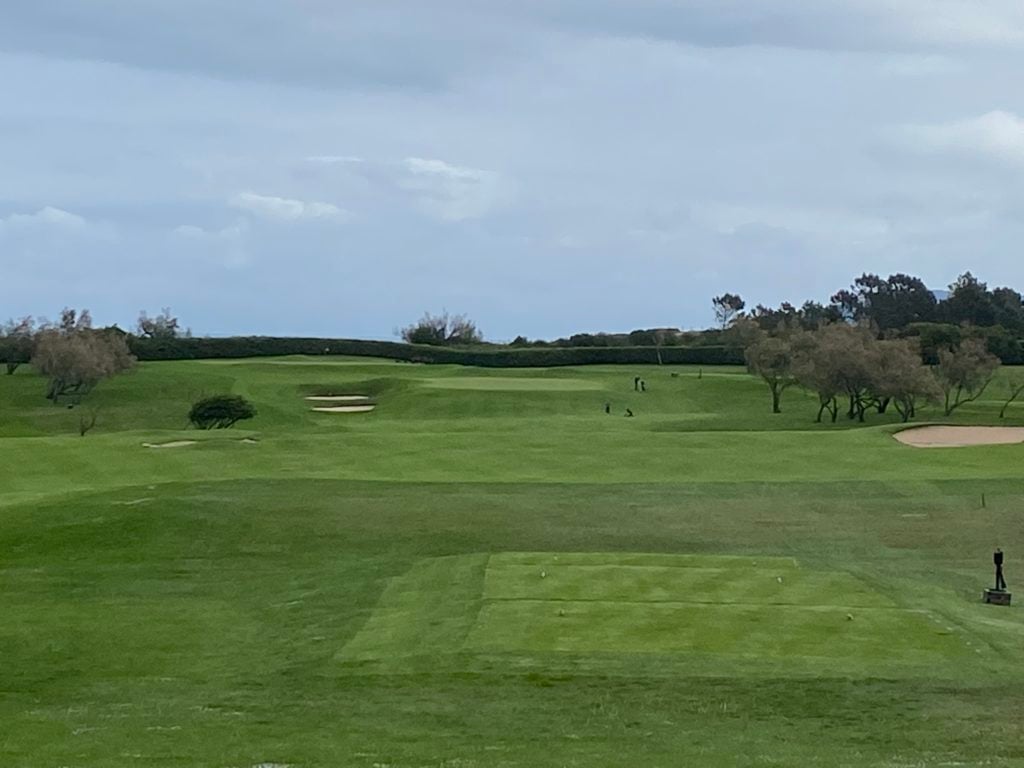 The 7th was my favourite hole on the course. You can see the hole laid out in front of you from the elevated tee. It plays downhill then your second shot is to the green that’s above you. It’s a 2 club difference from front to back of the tiered green. The 9th is another really good hole. Although it’s a relatively short par 4 at 350 yards, I would recommend a long iron or hybrid off the tee as the tree-lined fairway narrows in at 230 yards. Playing shorter off the tee gives you more options and it’s only a 9 iron or a wedge to the green. The trees on either side frame the green with the clubhouse in the background.

Playing through the Pines

The back nine demands accuracy off the tee as every hole is tree-lined. The 13th is a strong par 5 at 550 yards and plays back towards the sea. Play it as a 3-shot hole and it’s a straightforward par. The par 3 14th is a beautifully framed hole. It plays uphill with a large bunker cut into the hillside short of the green. The 18th is another par 5 of 550 yards. It’s a slight dogleg to the right and again the fairway narrows in the closer you get to the green. Like the 9th, visually, the narrow chute through the trees to the green with the clubhouse beyond is stunning.

It was a real treat to get to play at Neguri which is normally only members and invited guests. Costa Verde Golf is one of the few operators that have the arrangement to bring visitors to this club and it’s a must play, it’s that good.

Jon Rahm has a membership at the club and plays there regularly when he’s back in Spain. He’s dubbed it the “Torrey Pines” of Bilbao. Mountain views from the Uraburu clubhouse

Uraburu Golf is 15 minutes from the centre of Bilbao and was designed in 2003 by 2 time Masters winner and former Ryder Cup Captain, José María Olazabal.

Built on the side of a mountain, the course is challenging with narrow fairways and substantial elevation changes. It is walkable but we would recommend taking a buggy. The beauty of this course lies in the diversity of its holes, there are no two holes alike. This makes Uraburu Golf a fun course with a medium-high degree of difficulty meaning each round is a unique experience with spectacular views.

Play from the Yellows!

The course is 6,100 yards from the yellow tees and that’s plenty long enough with the elevation changes. It’s also ideal because if you played from the back tee on the first hole, it’s a blind downhill tee shot on a 400-yard hole with trouble left and right. From the yellow tee, you can see the green so you have something to aim at. The 2nd is a lovely par 3 over a lake, not long but you have to hit the green to make par. There are 2 par 5’s on the front nine, the 5th and the 9th. Both are over 500 yards and demand accuracy off the tee, especially on the 9th which has a lot of trouble all the way down the right-hand side. It’s much better to be short and on the fairway that to be longer and offline! I know this for a fact…Keep it left. My favourite hole on the course was the 11th, a 610-yard par 5. It plays downhill, thankfully, and is such a picturesque hole, beautifully framed with the mountains in the background. The 16th is another cracking hole. A 400-yard par 4, with a slight dogleg left and the 2nd shot, is over water to a narrow undulating green. It’s an excellent par 4.

José María Olazabal has done a magnificent job of sculpting this course on the side of a mountain and the greens were in excellent condition for early in the season. I highly recommend a visit to Uraburu Golf. It has wonderful views, is a challenging course and is very different to any of the other courses in the Costa Verde region.

You can add Meaztegi Golf, the Seve Ballesteros-designed public course covered in the previous article, to your trip to Bilbao as it is only 25 minutes from Bilbao.

Bilbao’s football team, Athletico is nicknamed “the Lions”. Their stadium was built next to a church called San Mamés (Saint Mammes).

Mammes, who was an early Christian, became an orphan when his parents were executed for being Christians. According to legend, Mammes was tortured for his faith by the local governor and then tortured again by the Roman Emperor Aurelian. Mammes was later thrown to the lions, but he managed to tame the beasts docile by preaching to them. He was then sentenced to death and was killed with a trident to his stomach. A statue depicting Mammes and the lion can be found in the Casa de la Misericordia in the city.

The old stadium, built in 1913 was known as The Cathedral and the new stadium opened one hundred years later in 2013. It was built right next to the original one. The ground holds just over 53,000 fans and is the largest in the Basque region.

The club is known for its policy of bringing young Basque players through the ranks, as well as recruiting players from other Basque clubs. Since 1912, Athletico has played exclusively with players meeting its own criteria to be deemed Basque. This can be seen as a unique case in European football. The club has been praised for promoting homegrown players and club loyalty and it has certainly gained them a fanatical following. 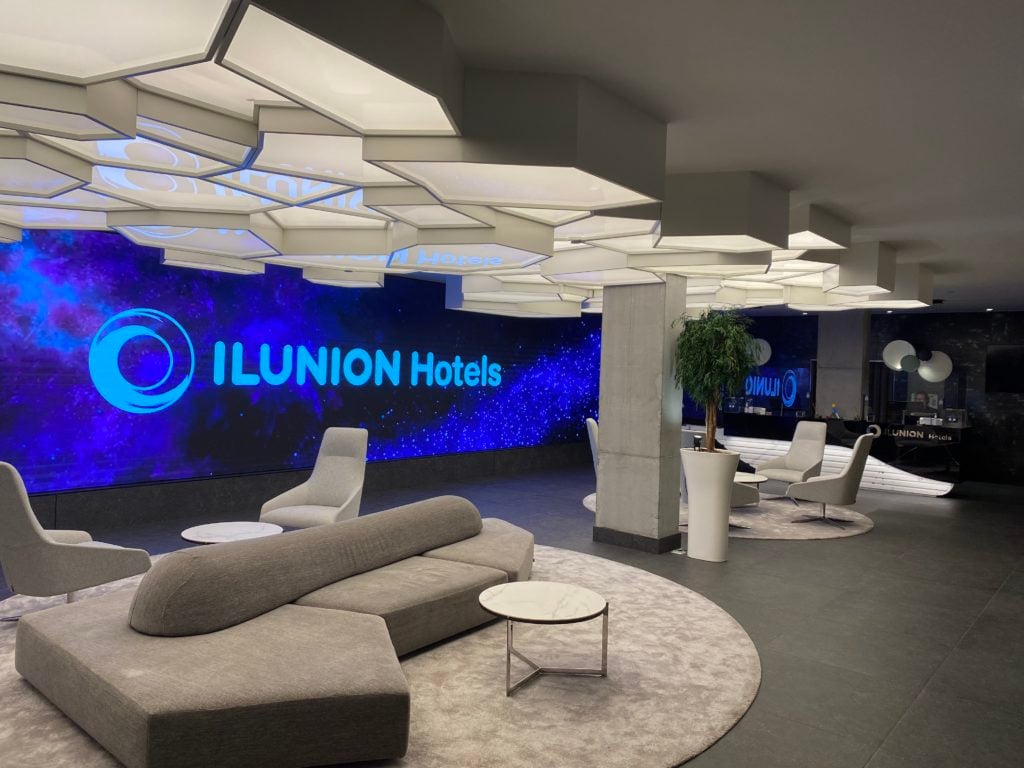 We stayed in the 4-star Ilunion San Mames which is a new hotel next to the Bilbao bus terminus. The hotel is in the perfect location for the city’s premier tourist attractions such as the Guggenheim Museum, Gran Via de Bilbao shopping district and Atletico Bilbao’s San Mames Stadium, all of which are within walking distance. The rooms are a modern contemporary style and very comfortable. The rainfall shower was a treat after a hard day’s golf, and the food in the restaurant was excellent. All in all, the perfect hotel in a vibrant city. We look forward to a return visit very soon.

Coming soon. We visit the beautiful city of Vitoria, the capital of the Basque Country. 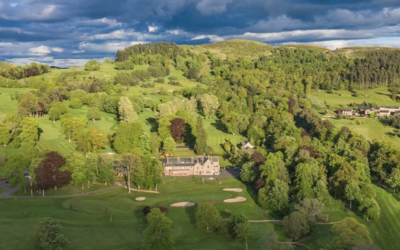